The Bread Run: When I Delivered Loaves of Bread for Pennies for Bread

The loaves are already “stacked to the back” of our Ford delivery truck in the morning before we leave. The bread was baked the day before by a handful of Benedictines and sliced and bagged by volunteers, mostly retired men, that same afternoon. All the bread, about 900 loaves, is placed in trays for easy delivery.  We have about twelve different stops to make in the city and we want to finish the route before the southern sun becomes unbearable. 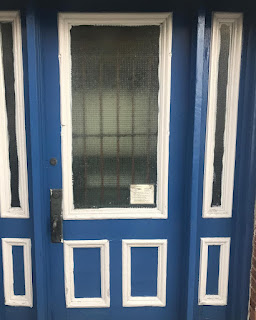 We leave the Abbey early to beat the commuters; I notice it takes a few swipes of the windshield wiper to get rid of the moisture and insects that have collected through the night.  Even with a full cup of coffee in my system I usually fall asleep on the passenger side as Joe crosses the long causeway over Lake Pontchartrain into New Orleans, listening to AM radio.  In the brief moments that I am awake, Joe, in his own words, give a commentary on world and local events and I look out into the lake to see what it looks like this time: either calm and muddy or sometimes the lake is brilliantly blue, like an ocean, but this morning it is dull with an irksome pallor of gray.

Once we get into the city proper, I begin to wake up from my nap.  New Orleans is an organic city; the infrastructure is not set to a grid-like New York’s long rectangular blocks or the Nation's capital with its preconceived mid-19th-century design, except for the Vieux Carrée, which is boxy and closed in on the cusp of a Mississippi crescent, prohibiting such order.
Claiborne Avenue is the only street that cuts through the heart of the city from west to east and it winds through it like the river herself.  And there is no main street, the only street that comes close to such a moniker is Canal Street, near which three of our stops are located. This early in the morning the city is relatively cool and humid, beginning to wake up; New Orleans has never been a morning city, more akin to the nightlife, so everyone looks groggy and asleep, the few people you actually see so early, coming out of the dives and dance clubs that populate the city.
Those of us in cars this early in the day are commuters couched in their comfortable vehicles, like us.  Other than that, the only other people up are the ones without a home.  It is not too difficult to discover the underbelly of New Orleans.   There is an inn on Camp Street in the Warehouse district that houses men who need a place to stay and a meal.  It is the only place like it in the entire city.   All the other shelters require a nominal fee.  At Ozanam Inn every night at shutdown time, men come off the street, sometimes fathers with their sons, but mainly men adrift, out on the street for various reasons — not always the characteristic displaced person, either.
A common misperception of homelessness involve associations with drunkenness, body odor, and a scrappy unshaven man with a brown paper bag speaking insanely who would otherwise have to find a park bench or a sidewalk to rest, maybe ending up in jail for the night or getting caught up in the city’s notorious, if not nefarious, nightlife. I challenge this notion of homelessness.
We bring lots of bread to Ozanam Inn and they never have leftovers when the week is done. They get the most of our bread and every time we deliver to them, more often than not, they give us something in return. Not because it is expected, but rather that is the way Squirrel likes it.
Squirrel is a short man, the head of the kitchen and he bears a permanent grin.  He was once a street guy himself but Ozanam Inn’s program saved him, so he says.  The program gets men off the street and puts them to work in the Ozanam program itself; all of the money they make is put aside until they can place a down payment on an apartment and learn not to squander their savings on drugs, alcohol or whatever has been keeping them on the street.  Once they reach a state of stability they can graduate and begin to live once again on their own, still participating in the Inn’s programs.
For Squirrel — he decided to work full time at the shelter.  He gives Joe king cakes for Mardi Gras and cinnamon rolls the other days of the year to distribute to the sites we visit.  One place loves the special things we bring that once they asked us, “Where are the cinnamon rolls?” even before we could place the loaves of bread on the table.

PDF Copy for Printing
Posted by Greig Roselli at 10:04 PM