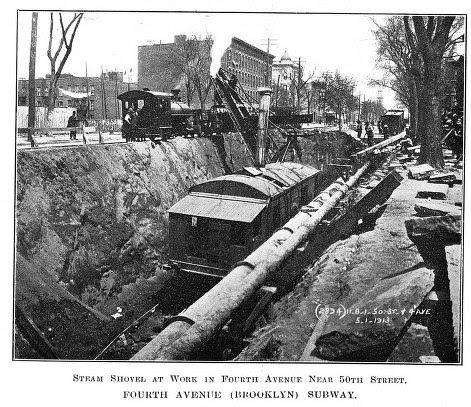 Coming up out of the southwest staircase on the corner of Forty-Fifth Street and Fourth Avenue the rest of the world radiates in every direction. Looking north, the Watchtower building is somewhat visible; Have you ever been visited by a Jehovah's Witness? Well, they get their pamphlets from that building. Or they used to at one time. I think the Jehovah's Witnesses moved shop. Looking South, if it is a clear day, (you can see tomorrow) you can see the Verrazano-Narrows suspension bridge looming like an excessive decoration on a child's birthday cake, all silver and toy-looking. Peering West down Forty-Sixth Street first one is struck by the entourage of cars lumbering along the Gowanus Expressway, a green-looking overpass that stretches itself from Gowanus and Red Hook along Third Avenue to Sixty-Third Street and then it veers East. Just beyond the expressway, if you peer hard enough, you can see the rough hewn sparkle of Lower New York Bay.


To walk along Fifth avenue it is necessary to walk up from Fourth Avenue. Fifth Avenue is what they call the B.I.D. I think this means Business Industry District. I dated a guy once who made signs for the Sunset Park B.I.D. He didn't like it when I joked he worked for Fifth Avenue -- then I'd pause -- and say, "not in Manhattan!" Never been good with jokes, me. I always say I will live in one of those quaint brownstones that line Thirty-Sixth street to like Fiftieth street. Fuck yeah. I want a brownstone so I can place a "no solicitation" sign on my stoop and adorn the molding of my door with festive papier-maché effigies of Jesus (ain't no matter if it's raining or freezing). The building I live in sits atop a grocery store. The best way to get a nice view of the structure is to stand on the opposite side of the street and look at it on the southwest corner. Architectural urns, like eight of them, sit atop the cornice, which in the case of this building is a drab vanilla decoration that one only appreciates if you happen to look up, see my building, and say hey, that building sits atop a grocery store, and lookie, there is a bland vanilla cornice with an urn-like thing along it; wow. I imagine only the guys who play checkers in the summer and smoke marijuana have ever happened upon the architectural subtlety of the building. I know. Because one told me when I was primed up for a dinner party and bought a six pack from those blokes. Hey man, look at the vanilla cornice and urn-like things that adorn the top of that apartment building. Rad. Yeah. It's a nice looking cornice, that. A green turreted building sits on the corner of Forty-Ninth and Fourth Avenue, while smoking a cigarette it is amusing to watch the B11 bus come along the avenue, especially when it is out of service.

The Forty-Fifth Street Station has only one exit for straphangers at the far northern terminus of the platform. On street level it is easy to discern another entrance (or exit, however you shake it) on Forty-Seventh Street. I am not certain about the use of this entrance, but at night the hatch that leads down into the station is open and I have seen MTA employees coming in and out of it. My hunch is that it is a substation for the Transit Authority's electrical system. Not having the courage to walk down into the entrance myself, I must resort to speculation as to its purpose. Sometimes tourists end up at Forty-Fifth Street Station. I surmise it is because they ended up here after meandering the verdant hillocks of Greenwood Cemetery and happily came upon the Forty-Fifth Street Station after feasting at a Peruvian restaurant. One never finds tourists on the Ninety-Fifth Street bound side of the station; always on the Manhattan bound side. Forty Fifth Street Station is serviced during the day by the Fourth Avenue local train, labeled R and late at night the R becomes a shuttle between Ninety-Fifth Street in Bay Ridge to Thirty-Sixth Street in Sunset Park. The N stops here late at night too and on odd days, because of a service change, or due to the impending rapture, the D train will stop here. But normally Forty-Fifth Street is a nondescript station stop. It's most active moments are rush hours -- an unbelievable amount of people stream out of the rolling stock when I come home in the evenings. In the mornings Fourth Avenue is a domestic maelstrom -- watch out for the families with baby carriages.

The station shell at Forty-Fifth street is vertical and has nothing attractive about it: no murals of Lenin (Diego Rivera should have done a fresco called La Resistance here), no interesting tile work, nothing promoting Transit Art in the least. They only imaginative aspect of this station is the Station Attendant who nods at me in quiescent antagonism when I exit via the emergency door instead of using the turnstile. Watch out on the staircases. One afternoon a hipster tripped and sprung an ankle. They brought her back to Billyburg in an ambulance. Since hip Park Slope lies like forty blocks to the North and Greenwood abuts it along Thirty-Sixth Street, and Bay Ridge (where you can live in a single family dwelling!) dominates the bottom cup of Brooklyn, Sunset is a mostly quiet, domestic enclave.

The night the Sunset Park rapist was on the prowl, I walked the streets at night hoping I could run into him -- just before he was about to strike -- so I could do a citizen arrest kind of thing. I am really into that shit. I have a wizard costume in my closet that I am half-way thinking it'll will do fine as my vigilante costume. BUT -- this night -- no such luck. Actually I was out on the streets at like two thirty in the morning, not because I was looking to justify wrongs, but rather, someone had found my cell phone in Sunset Park.

The park that the neighborhood is named after sits high and mighty. Fabulous views of Lower Manhattan and Lady Liberty (and no, she is not pregnant, go to MoMa's current Sweet Violence exhibition for that).

Two guys had found my phone, texted Lonnie, the last recipient of an incipient text, "come to dinner!" Lonnie texted me. See. I got it. See. Because I have this contraption on my computer that sends me texts to my goddamn e-mail. Dude, the text said, some dude texted me, they saw my text and your text saying come to dinner, and they are saying come to Sunset Park to pick up your mother fucking phone. Nice guys too. I said, I lost my phone? No I didn't lose my phone. Yeah you did man. Must have slid out your pocket when we were looking for Cassiopeia. Oh. Sure enough Lonnie was right. Yeah, Lonnie, lost my phone. And yeah, let's go watch the Korean dancers do that Korean dance thing on the basketball courts again. Yeah, he said, next time I will be sure to bring my copy of Catcher in the Rye in case I get bored. Meet them at the taco truck, dude. OK. I said. Peace, man. See ya round like a doughnut. Hah hah. So funny.The taco truck on Fifth Avenue is one I have written about before in my subway diary. Good tasting tacos el pastor.The two dudes were waiting for me, energetic to hand over my phone. Altruism always feels better when it is someone else doing the good deed.Smiling and happy they had helped me out, they went back into the inky darkness along the park -- they said they live near Fort Hamilton Parkway. Such a nice thing to do, I thought -- and to think I had no idea I had lost my phone. I swear I can hear the sound of the R train rumble along Fourth avenue, one avenue block away --

The Borough of Brooklyn seems quiet for a narrow celestial moment. Almost tripping over an empty six pack of Stella Artois, I perambulate myself home, wishing the R had a local stop next to Tacos El Broncos.
Posted by Greig Roselli at 5:07 PM