I went to SIGGRAPH 2009 today, an international exhibition of technology and interactive graphics. The question that pervaded my mind was, "What is graphics?" Graphics is not only animation nor is it always easy to define. Graphics can be both analog or digital, or a mixture of both. I brought to the conference questions about the nature of graphics. Bonnie Wood had told me about SIGGRAPH years ago and I was waiting for their return to the Crescent City. The last time the conference was in New Orleans was ten years ago. Because animation studios work out of Los Angeles, and Asia is so close, usually the conference is out west, so I was thrilled when they decided to come South every decade or so. I heard the last conference was bigger than this one, but I must say I was still impressed. Nearly the entire convention center was filled. I seldom come to this next of the woods. I call it the big building built beneath the expressway. 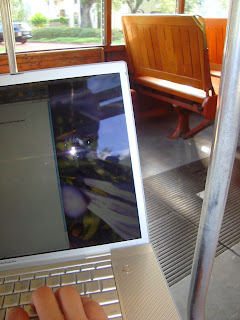 This morning I was running late, took the streetcar downtown and walked five or so blocks to meet Bonnie. I registered but I did not see her so I waited for a half hour and people watched. My phone was out of commission. I am going to save my iphone story for another blog:

But, Max did an autopsy on my phone and it is dead. I am stuck with my old cingular phone (which I also left), which is fine, but I realized how dependent on my iPhone I have become: no Google maps on the fly, no email on the go, no random checking of random checking. I absolutely hate it. A person dies without water in the desert; in a digital desert I would die without my phone. I have become so used to having it as an information companion that without it I feel similar withdrawal symptoms associated with people quitting tobacco or alcohol. I am grateful to Max though for agreeing to fix my screen although I was not much help as I stood in his living room, suppressing panic mode, as he took apart my phone with an exacto knife.

Sitting in the convention lobby. Watching the stream of people.

I will write tomorrow more about the exhibitions, but I am tired right now.