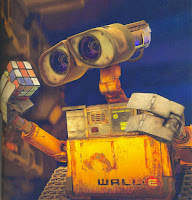 I woke up this morning and weirdly began to ponder that movie Wall-E that I saw last Winter. I woke up oddly early this morning, which is uncommon for me when I do not have to work (and the fact that I had a piercing pain in my lower dorsal area). I made my cup of coffee and went and sat on my deck (not my desk) and began adding to a Wiki I am working on for my MLIS program. I was feeling uncharacteristically productive -- which led me to the Wall-E premise and the added fact that I have been following David Pogue's advice to add typing expansion software to a computer (I decided on TypeItForMe after reviewing Typinator and TextExpander).
So, with all of this productivity racing in my mind Wall-E seems to be an apt patron saint. On screen he seems so pleasant in his daily diurnal chores, that for a minute, I was co-joined with him in a kind of ecstatic state (not like Saint Teresa in Ecstasy, but close to it), as I went about my apartment, which is usually quite a mess, but has been recently quite clean and organized (although I still cannot find anything). If you are wondering: the motivation to clean my house is threefold: 1.) I thought I was going to have my better friend on Saturday and 2.) on Monday I have a house guest for a week so I thought it kind to spruce the place up a bit. The third motivation is summertime and I have nothing else to do but add to the décor of this apartment in which I will probably be staying for at least another year. I added a runner rug to the hallway leading to the bathroom; I found a a wooden red upholstered bench behind a dumpster; I hung some picture frames in my bathroom; I cleaned a pile of dishes (ahem) that had been uncleaned and hanging out on my deck for three months (I am not even joking); I vacuumed my house with a Dyson that Lorie lent me; and I have a cleaning appointment with Stanley Steemer later this month. Fucking Christ, I am becoming a veritable Ms. Molly homemaker. 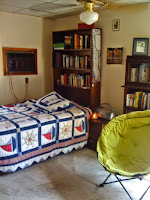 Can someone please come over and confirm my identity? 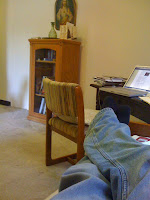 I think I have been taken over by a poltergeist who goes by Martha Stewart in the daytime and Julia Child by night. Jesus. But, really, this has been good for me. This past year I have lived in basic squalor, so it is nice to know what a real apartment should look like. And the fact that Wall-E was able to keep his junk closet neatly organized has given me grace.
Posted by Greig Roselli at 8:58 AM